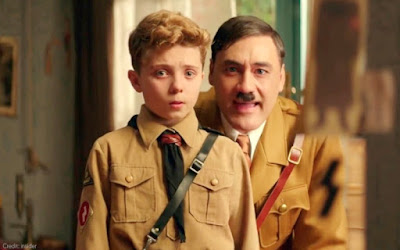 Roman Griffin Davis as the 10 year old JoJo is so incredibly attractive that the movie is wonderful from the opening scenes.  The "Heil Hitler" montage at the beginning shows clearly how a country was taken captive by Hitler.  JoJo is ardently German, to the extent that he has a wonderful imaginary friendship with Adolf himself (played by director Taika Waititi).

I have to admit that my damn hearing made it difficult to understand everything.  Usually I watch movies with closed captioning, but that was not available for this film, so I missed a lot, but still I got the gist of it.  An ardent Jew-hater, JoJo finds a Jewish girl hiding in the close of his late sister's bedroom and began to learn that they aren't all as bad as he was led to believe -- they don't all smell like broccoli and don't all have horns, for example.

The relationship between the two grows and strengthens when JoJo finds his mother hung in the public square.

It's an entertaining film and easy to see why it was nominated for an Academy Award. 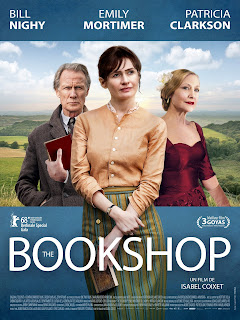 This is a very British, slow moving, yet engrossing story, based on the book by the same name by Penelope Fitzgerald.

Set in the 1950s, a war widow moves to a small town to open a book store in an abandoned building which has stood empty for many years.  For reasons that are never made very clear, everyone seems to hate the idea, particularly the rich bitch who suddenly decides she wants the building for an art center.  She has so much influence that she manages to get a special bill passed by the legislature which allows the building to be taken over by the government, and ultimately the widow loses everything, but manages to get back at the town and its residents for her treatment.

In between there are friendships, mentorships, and wonderful narration.  scenes between the widow and the town's male curmudgeon are marvelous.

Strike Up the Band 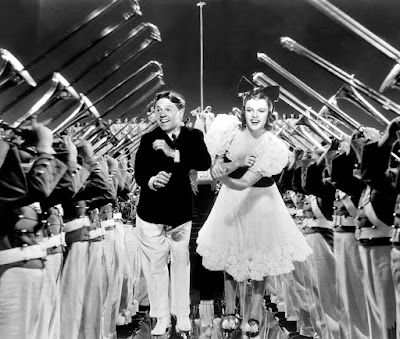 This is one of those movies where you roll your eyes on just about everything, since nothing is believable.  Still it's Mickey and Judy and it's fun to watch.

Teenage drummer Jimmy Connors (Mickey Rooney) dreams of winning the contest for school bands hosted by popular band leader Paul Whiteman (himself). In order to enter, Jimmy and his pals, including vocalist Mary Holden (Judy Garland), must accumulate $200 for the train ride to Chicago, where the contest will be held. Jimmy and his friends decide to put on an epic student play to raise the funds they need, but a sudden illness threatens to cost the band their chance.

The high school play is hilarious.  There must be 1,000 in the audience and the costumes would cost a fortune...and there is no question about whether or not Busby Berkley choreographed it! 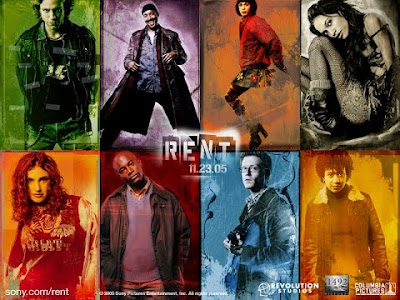 Rent is the only big show I have seen on Broadway.  We've been to New York a few times and usually see a show, but it's the off Broadway shows.  I can't remember when it was that we saw Rent, but when he learned we were coming to New York, my friend Ron was thrilled to buy us tickets to see the show, which he loved.  It was early in my life as part of the The Last Session group, where it seemed most of the people loved Rent as much as they loved The Last Session.  And I was excited to actually see a BIG Broadway show.

I hated it.  It's not my kind of music, I couldn't follow the plot and I had trouble staying awake.  I raved about it, of course, because Ron was so happy to share the show with us, but I did not like it.  (I can confess that now that Ron died a couple of years ago).

As a critic, I have reviewed Rent three times and it's a difficult review to write because I still don't like the show, still have difficulty following it, don't like the music.  But I decided to record the movie and watch it, carefully.

I loved it.  I don't know what it was about the movie vs. the stage show, but got involved in the various characters and remembered who was who.  I was so glad I had seen the movie and suspect I will have a completely different feel for it the next time I have to review it 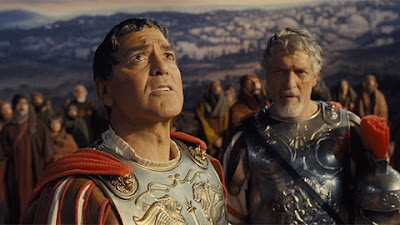 You look at pictures for this movie and you have the feeling i t's some biblical epic, but it's not.  It's about Hollywood with some great familiar scenes -- from Spartacus, an Ethel Williams take-off, a Gene Kelley/Frank Sinatra musical, and other scenes that will look very familiar.

It's really the story of the studio "fixer" and how he takes care of a pregnant star, a cowboy who can't act but has to be in a British drama, and his biggest star kidnapped by Communists (a very slight tribute to Wizard of Oz)

Anybody who loves old movies will love this film. 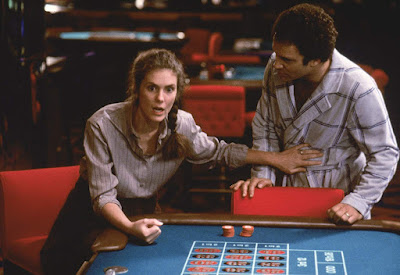 This is a 1985 comedy with Albert Brooks (David) and Julia Hagerty (Linda), co written by Brooks.

David and Linda are a yuppie couple living in Los Angeles, each with great jobs.  David is expecting to be made vice president of his company and they have sold their house and bought another multi million dollar home.  But not only is he not promoted, when hegets angry he is fired.  He convinces Linda to quit her job and when they liquidate all their assets they are able to buy a motor home and have enough of a "nest egg" to live for many years, driving around the country having adventures.

But their first stop is Las Vegas, where Linda gambles away alla but $800 of their money and they spend their time trying to find jobs in a small town (she works for a fast food joint whose manager is about15 years old; he works as a crossing guard for $5.50/hr).

What life decisions they make comprise the rest of this movie.  Not a knee slapper but mildly funny, and enjoyable.
Posted by Bev Sykes at 2:24 PM No comments: 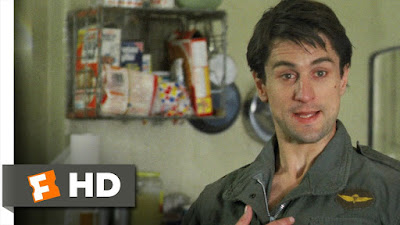 Today is the 21st anniversary of Paul's death and this was the logical movie to watch.  It was his favorite movie and, in fact, his friend Paul K wanted to name his son after Paul, but since the name would have been the same his son's middle name became Travis, after Travis Bickle, Robert DeNiro's character.

This is a brilliant movie, but it leaves out a lot of things.  It is not a story of Bickle, but more a series of days in his life without knowing what caused those days to happen.

Amazingly I had never seen this movie before and feel that today was the perfect day to watch it.

Ned fixed us clam dip and chips to eat and sushi for us to have afterwards, for dinner.

Bev Sykes
Part-time theatre critic, and, according to some, a "bitter hack."